In Her Burning: A Surreal Diary 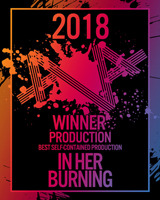 In Her Burning: A Surreal Diary is an eight-episode narrative podcast set in a dark and fictional world, composed from the protagonist's audio diaries.

In an isolated society, teenage Erith has been chosen for Polishing, a ritualistic surgery that erases one's irises so the individual may see the Volucris—strange and enigmatic creatures that live in an alternate realm only visible to the Polished. She discovers a new, haunting reality after her procedure that warps light into darkness and reveals hidden secrets about the world. As she progresses, she and her companion, Calyx, discover frightening truths about the Polished and realize they are in danger of losing themselves to the changes Polishing inflicts on the mind.

*Note: AdBlockers or Privacy Blockers may interfere with audio players. You may need to disable these if the audio player isn't displaying or working properly.

In Her Burning was made by film & television and sound design students at the Savannah College of Art and Design as Sin Ribbon's secondary thesis project. Due to academic obligations and time constraints, the show's run had to be limited to a single season. The entire cast and crew used hours of their own free time to bring the show to life, and for that, Sin is eternally grateful.

The show was written and recorded in winter and spring of 2017 respectively but almost didn't get completed. For the summer of 2017, the files sat collecting digital dust. Sin was fortunate enough to be introduced to Elizabeth Wolford, a fellow MFA student at SCAD, who came onto the project in the fall and saved the day. The show officially premiered November 21, 2017 and ran for eight consecutive weeks until its completion.

In the future, Sin hopes to expand the series either by doing a full remake of the podcast, creating a video game, or writing a novel version.